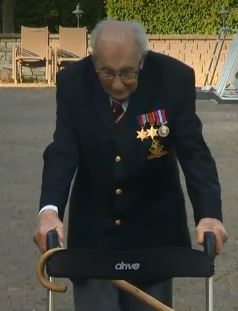 A 99-year-old World War II veteran has raised $17 million for health workers in the UK simply by walking in his yard. Tom Moore set out to complete 100 lengths of his 82-foot garden in Bedfordshire, England, before his 100th birthday on April 30th, knocking them off in groups of 10. The retired captain, who recently underwent treatment for cancer and a broken hip, initially hoped to raise $1,250. But donations came in so fast to the JustGiving page set up last week that it crashed for a time. As of this writing, a day after he completed his mission with help from a wheeled walker, Moore had raised $17 million from 690,000 people. The money will go to NHS Charities Together, which says 150 charities will benefit as a result. The veteran also received congratulations from nurses, politicians, and actors, while thousands signed a petition requesting he receive knighthood. Moore, however, is content to rally the troops.