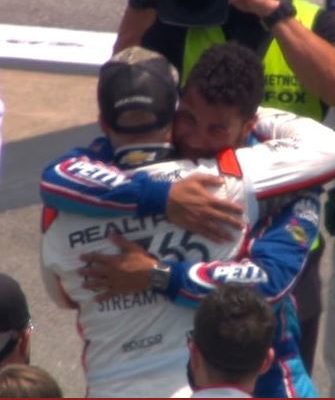 NASCAR drivers, pit crew members, and others walked alongside Bubba Wallace and escorted his Number 43 car to the starting line in a show of support at the Talladega Superspeedway on Monday — a day after a noose was found in his garage. In videos shared yesterday, Wallace’s car is being followed and pushed down pit row by a large procession of people. Wallace, wearing an American flag face mask, was emotional while hugging drivers and supporters, including NASCAR legend Richard Petty. Wallace, currently the only Black driver in NASCAR’s top circuit, has been an outspoken advocate of the Black Lives Matter movement and the corresponding protests against racism and police brutality. He wore an “I Can’t Breathe” shirt before one event, repainted his car with the “Black Lives Matter” phrase and pushed NASCAR to ban the Confederate flag, which it did. Wallace ultimately finished 14th in yesterday’s race.