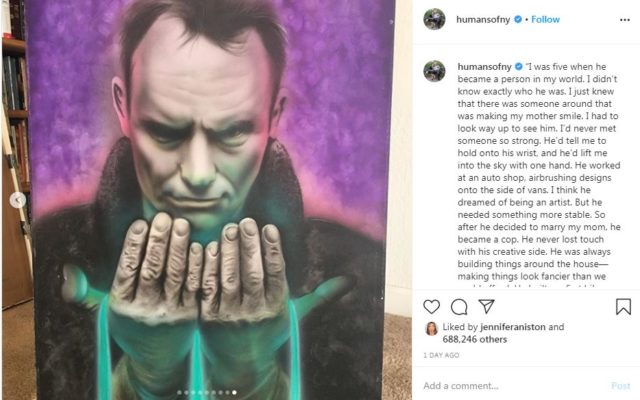 In an Instagram post from Humans Of New York, a woman says she was 5 when her future dad met her mother; he had been “working at an auto shop, airbrushing designs onto the side of vans.” To support the family, he became a cop instead. He built a small art studio in their home, with dreams of returning to painting when he retired, and completed a single painting in it—an image of Sting copied from an album cover. He was later diagnosed with multiple sclerosis, which became so severe that he couldn’t hold a paintbrush. The woman came across the painting when they were going through her father’s possessions in his final days. “‘What should I do with this?'” she said. “His response was immediate. ‘Give it to Sting,’ he said. All of us started laughing. But Dad grew very serious. His eyes narrowed. He looked right at me, and said: ‘Give it to Sting.’ So I guess that’s my final assignment.” The widely-shared post came to the attention of the singer’s daughter, Mickey Sumner, who got in touch with the woman to help grant the man’s wish.

72 People’s Last Wishes That WILL Make You Cry

“I was five when he became a person in my world. I didn’t know exactly who he was. I just knew that there was someone around that was making my mother smile. I had to look way up to see him. I’d never met someone so strong. He’d tell me to hold onto his wrist, and he’d lift me into the sky with one hand. He worked at an auto shop, airbrushing designs onto the side of vans. I think he dreamed of being an artist. But he needed something more stable. So after he decided to marry my mom, he became a cop. He never lost touch with his creative side. He was always building things around the house—making things look fancier than we could afford. He built my first bike from scraps. He encouraged me to read. He encouraged me to write. He loved giving me little assignments. He’d give me a quarter every time I wrote a story. Fifty cents if it was a good one. Whenever I asked a question, he’d make me look it up in the encyclopedia. One day he built a little art studio at the back of our house. And he painted a single painting—a portrait of Sting that he copied from an album cover. But he got busy with work and never used the studio again. He was always saying: ‘when I retire.’ ‘I’ll go back to art, when I retire.’ ‘I’ll show in a gallery, when I retire.’ But that time never came. Dad was a cop for twenty years. He was one of the good ones. The kind of cop you see dancing on the street corner. Or skateboarding with kids. But in 1998 he was diagnosed with MS. First there was a little weakness. Then there was a cane. Then there was a wheelchair. It got to the point where he couldn’t even hold a paintbrush. We did his hospice at home. He seemed to have no regrets. He’d been a wonderful provider. He’d raised his daughters. He’d walked me down the aisle. During his final days, we were going through his possessions, one by one. He was telling me who to give them to. I pulled the Sting painting out of an old box, and asked: ‘What should I do with this?’ His response was immediate. ‘Give it to Sting,’ he said. All of us started laughing. But Dad grew very serious. His eyes narrowed. He looked right at me, and said: ‘Give it to Sting.’ So I guess that’s my final assignment.”