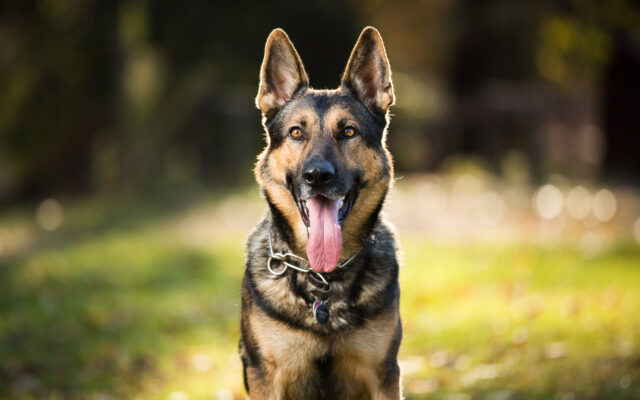 A German Shepherd dog smiles at the camera with its tongue out at a park outdoors with green grass and out of focus trees in the background.

A 1-year-old Shiloh shepherd, named Tinsley helped save the life of her owner and another person by leading legal authorities in Vermont, to the scene of a traffic accident.  Monday evening, the New Hampshire State Police (NHSP) received calls about a dog running loose on the Interstate.  When police arrived, they found the dog, but she kept running away.  “They could tell the dog was trying to show them something because she kept trying to get away from them but didn’t run away totally. It was kind of, ‘Follow me. Follow me,'” New Hampshire State Police Lieutenant Daniel Baldassarre told WCVB.  Tinsley’s actions saved her owner and her friend from the rollover accident.  Both are being treated and expected to survive.