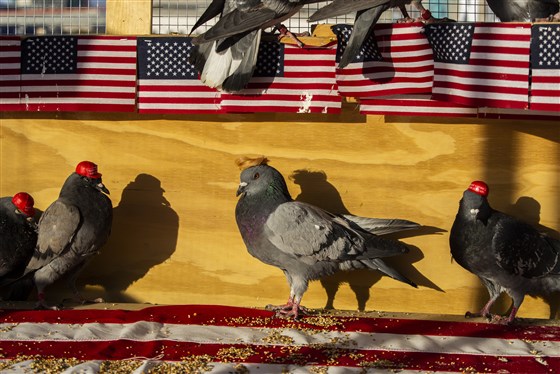 Remember the pigeons that were wearing cowboy hats in Vegas, and everyone got all upset?!  Well, now a new flock of pigeons wearing tiny “Make America Great Again” hats were released in Las Vegas by a group of Trump fans ahead of the Democratic debate. One of the birds even wore a Trump wig as part of the stunt. “Who’s responsible for it? An organization called “Pigeons United To Interfere Now” aka P.U.T.I.N …They said it was inspired by the Cold War-era CIA operation that used pigeons fitted with tiny cameras to spy on Soviet Union sites. In December, a flock of pigeons in cowboy hats was spotted in Las Vegas, and one of the birds later died, possibly from glue fumes. P.U.T.I.N doesn’t say how it got the tiny bird sized MAGA hats to stay put on the birds heads.