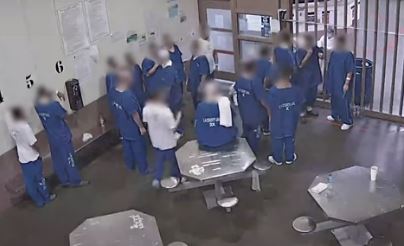 Newly-released video shows California inmates infecting each other coronavirus — mistakenly thinking it would get them sprung from the slammer. In the clip, inmates at the North County Correctional Facility in Castaic can be seen passing around a worn mask among their group, taking it in turns to raise it to their faces. Another group of around 20 inmates can also be seen sharing cups and bottles, even though they would normally have their own drinks, Sheriff Alex Villanueva said. They also chugged hot water just before a nurse took their temperatures, the sheriff said — hoping it would look like they had a fever. Villanueva said the “deeply disturbing” footage was found after his officers investigated why there was “a very noticeable” spike in infections at the lockup in late April. “As a direct result of the behavior seen in the video, 21 men tested positive for COVID-19 within a week,” the sheriff said. They won’t be released.