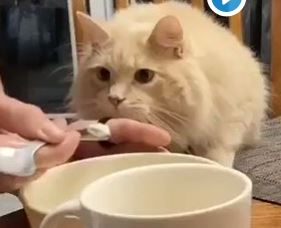 A pet owner filmed giving his cat ice cream for the first time is getting some backlash on Twitter. The 11-second clip has received nearly 400,000 views since Monday when it was posted. In the video, a man is holding a spoon with a small dollop of ice cream on the back end. He is holding the treat up to his cat, which takes a lick and immediately falls back, seemingly wanting to get the ice cream out of its mouth, or off its fur where some of it appears to have landed. The man tries to remove the ice cream, but the cat keeps moving its face. Though some found the video amusing and wrote that they wanted to try it with their own cat, most took issue with it, claiming the short video was a form of “animal cruelty.” Many of the Twitter users accused the owner of intentionally giving the cat a brain freeze, which might not be too far off. “Cats have very similar nervous pathways [to humans],” one veterinarian confirmed.