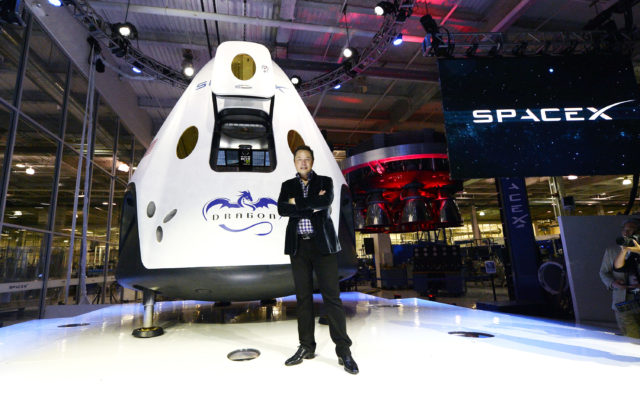 HAWTHORNE-CA-MAY 29: SpaceX CEO Elon Musk unveils the company's new manned spacecraft, The Dragon V2, designed to carry astronauts into space during a news conference on May 29, 2014, in Hawthorne, California. The private spaceflight company has been flying unmanned capsules to the Space Station delivering cargo for the past two years. The Dragon V2 manned spacecraft will ferry up to seven astronauts to low-Earth orbit. (Photo by Kevork Djansezian/Getty Images)

SpaceX is set to make history Wednesday evening, blasting an all-civilian crew into orbit for the first time.

The three-day ‘Inspiration4’ mission was chartered by billionaire Jared Isaacman, and will raise more than $200 million for St. Jude Children’s Research Hospital.

Isaacman will be joined by engineer Chris Sembroski, artist Sian Proctor, and cancer survivor Hayley Arceneaux, who at 29 years old will be the youngest person ever to travel to space.

The crew will blast off from Kennedy Space Center at 8:02pm EST and climb 360 miles into orbit – that’s 100 miles farther than the International Space Station.