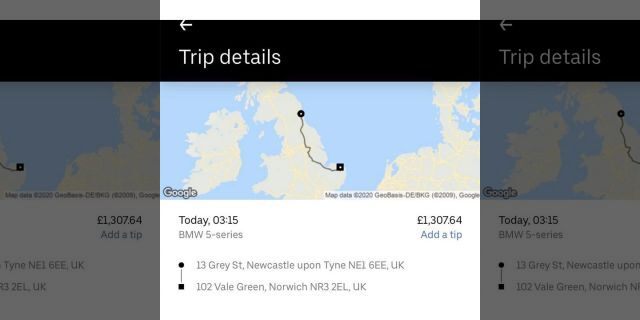 A drunk university student trying to get back home after a night on the town woke up in an Uber 250 miles away from his destination, with a $1,700 bill. The engineering major told a college news website that he got in the car in Newcastle, U.K., and accidentally typed a Norwich address into the app. The guy wants to remain anonymous and is asking to be called James,  said he actually slept through most of the five-hour trip and couldn’t believe what had happened when he woke up. He said ….“When I woke up, I literally thought it was a dream. The bill ended up being $1,307 pounds (about $1,700 US), but when the driver figured out what happened he decided not to charge him for the trip.  James gave him a five-star rating for the generous gesture and then got on a train home. To make things worse, he got fined for not having a train ticket.