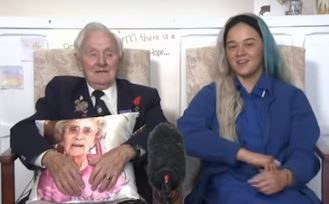 A British war veteran was moved to tears recently after a caregiver at his assisted living facility gave him the best surprise he could’ve ever imagined. Ken Bembow has been sleeping with a photograph of his beloved wife Aida each night following her death nine months ago. Realizing that sleeping next to a glass frame might not be the best idea, Kia Mariah Tobin, one of his caretakers at Thistleton Lodge in Preston, decided to put a photo of his wife’s face on a pillow and give that to Bembow, 94, to sleep with instead. She presented the sweet surprise to Bembow, and the war veteran immediately broke down in tears — a heartwarming moment that has since gone viral after it was captured on video. “We know our residents are missing their loved ones at this time but let’s not forget those who sadly aren’t here with us anymore,” the care facility wrote beside the tear-jerking clip, which has been viewed over millions of times.