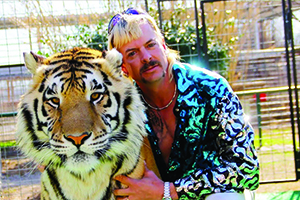 Nicolas Cage is set to star in a scripted series centered on Joe Exotic, the flamboyant subject of the hit Netflix docuseries Tiger King. The upcoming eight-episode series is being produced by Imagine Television Studios and CBS Television Studios, and will be taken to market in the coming days to find a network or streamer. The project is based on the Texas Monthly article Joe Exotic: A Dark Journey Into the World of a Man Gone Wild, by Leif Reigstad. The story centers around Joe Schreibvogel (a.k.a Joe Exotic) an eccentric, exotic zookeeper in Oklahoma who fights to keep his park even at the risk of losing his sanity. The series will live in the lion’s den with Joe, explore how he became Joe Exotic, and how he lost himself to a character of his own creation. The role marks the first television role of Cage’s career. He has long been praised for his film work, having won the Academy Award for best actor for Leaving Las Vegas.