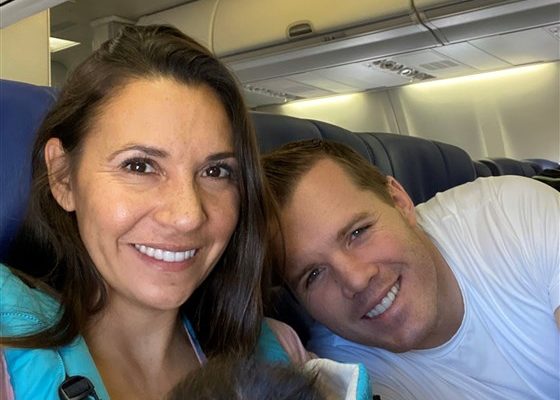 Bringing a baby home is always a special moment, but it was made even sweeter for Dustin and Caren Moore on a Southwest Airlines flight. When the new parents flew home to California with their adopted newborn daughter, they were treated to an impromptu baby shower. In a Twitter thread that has been liked more than 15,000 times, Dustin shared details of the kindness the family experienced from Southwest flight attendants and passengers. He said he was inspired to share the story last week after he was having a tough time and wanted to bring some positivity to Twitter.

“It’s been a difficult week. But, rather than publicly air my grievances, I’d like to share w/ you the kindness strangers offered us the day we brought our daughter home,”

“Parents who after 9 years of trying…. had been blessed with their first child. Parents who felt scared, but determined in their new role,” he wrote of their emotional state during the trip.

When their daughter woke up from a nap and needed a diaper change, Dustin said a flight attendant named Jenny cleared space in the back of the plane and gave them privacy. “After a change, Jenny and another passenger complimented my beautiful daughter and politely asked what had prompted a flight with such a young infant. I gave them the shortened adoption story, to which they hastily offered congratulations, and shared a few more kind remarks,” he wrote.

A few minutes later, another flight attendant named Bobby asked about their daughter, so Dustin said he shared a few details about their adoption story.

“Then, we heard the intercom,” he wrote. “The attendant Bobby came on and announced a special guest on the flight. Our daughter. ‘She’s just been adopted by her parents Caren and Dustin, and is making her way home.'”

The entire cabin erupted in cheers and applause.

Flight attendants then passed out napkins and asked passengers to share any words of wisdom they may have for the new parents. At the end of the flight, 60 napkins were handed to the Moores, which they have now placed in a scrapbook.

However, one piece of advice was extra special.

“On one of the last ones, a person had written down they were adopted 64 years ago and ‘Us adopted kids need extra love,'” Dustin said.

“It was nice to have that person on that plane who gave use the foresight and helped us realize everything will be fine,” he said.