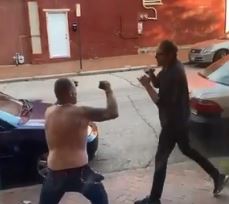 Cops are investigating a viral video that shows two men — including a Jeff Goldblum lookalike — duking it out on a Richmond, Virginia, street. The apparent street fight was recorded by 24-year-old Justin Townsend, who posted a clip of the brawl to his Twitter account, which has since been viewed more than 7 million times. He says the incident started over a parking space and escalated to racial slurs. The video shows a shirtless man square up against a tall, lanky foe, who looks strikingly like actor Jeff Goldblum. At the start of the fight, the Goldblum lookalike appears to land several blows, then hits his opponent in the face with a back kick, sending him falling into a nearby parked car. He then regroups, appears to land several more punches to the face and finishes the fight with a kick to the shirtless man’s ribs. Townsend said both men were treated for injuries by medics. It’s unclear if anyone was arrested.

The New York Post has the full story here.